A brief look back at our florist in Thessaloniki:

November 1973. Two young men decide to set their own course in the field of flowers. The “Fiorentino” florist based in Thessaloniki at 103 Mitropoleos street is a reality. Its founders, Anastasios Avanoglou and Giannis Hortis, managed to establish themselves in a very short time and decided to move on. Thus, in 1980 the Wholesale Nursery in Halkidiki Sylla was opened and a few years later the “Fiorentino Nursery” on Mar. Antipa Street.

Based on the recipe for success that already existed, in 1988 “Fiorentino” made a “grande” renovation and managed to stay ahead of its time with its new design and new proposals in a variety of flower arrangements and many more. For more than 20 years until the beginning of 2009, their own story was written in the Metropolitan 103 store.

In April 2009 the company changes, renews and its son Mr. Avanoglou takes over. “FIORENTINO Creations” now owned by Abraham Avanoglu, is ready to follow in the footsteps of “FIORENTINO” with his father’s support next to him at every step of his career. Initially the company moved to Chris Street. Izmir 14 and finally on April 1, 2011 opens its brand new store at 82 Mitropoleos Street. The successor of “FIORENTINO creations”, Abraham, took over the business in the form of a historic store and developed it into a modern company that can cover all the individual sides of what we generally call a flower. Deeply rooted in the consciousness of the world is the respect for the object, the aesthetics and the modern design that now meets the detail in every composition, space decoration, proper maintenance and transport conditions, the consistency and the high standards that modern man demands. .

In mid-2015 the company grows, wholesale of plants and cut flowers reopens in Mar Antipa, where it hosts the event preparation unit, as well as refrigerators for the maintenance and storage of all flowers.

The company is renamed “FIORENTINO LUXURY FLORAL SERVICES” and is ahead of every major city event.

In the showcase of FIORENTINO Luxury Floral Services, you will always find unique compositions that are completely different from the previous ones. Taking into account the freshness and uniqueness of floral designer Abraham Avanoglu, he proposes his ideas inspired by the demands of the new generation in combination with the 42 year tradition. 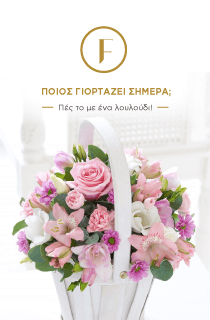 “My basic philosophy is absolute quality, importance in detail
and the emphasis I put on something so sensitive but at the same time so beautiful ….
the flower. The expression of your feelings is my source for creations
with flowers … Say it with flowers !! “

Professionalism, experience & creativity are some of the reasons to choose our services!